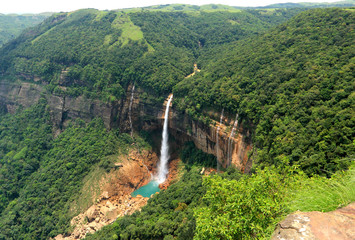 Cherrapunji is a highly sought-after tourist destination in north-eastern India that attracts visitors all year. As the second-wettest place on Earth, Cherrapunji never experiences a dry spell. However, it is not recommended to visit the area during the Monsoon season because it is drenching and not suitable for road travel. Cherrapunji is best visited between September and January. Many festivals are held during these months, such as the Nongkrem Dance Festival, which attracts a large number of tourists. The weather in Cherrapunji is also beautiful at this time of year.

It gets moderate rain during the summer, but May is the wettest month and should be avoided. During the summer, the temperature remains quite pleasant. During this season, you will enjoy your visits to the caves. Aside from that, the location provides some spectacular views that extend all the way to the plains of Bangladesh

Cherrapunji is best visited in the winter. Despite the fact that temperatures may drop as low as 5° Celsius. The average temperature remains around 15° Celsius, making it an ideal time to visit all of Cherrapunji’s major attractions. From visiting the famous double-decker root bridges to enjoying the world’s fourth largest fall, there are numerous activities that are both adventurous and simply out of this world.

Things to do in Shillong

Places To Visit In Shillong

Places to Visit in Cherrapunjee (2021)