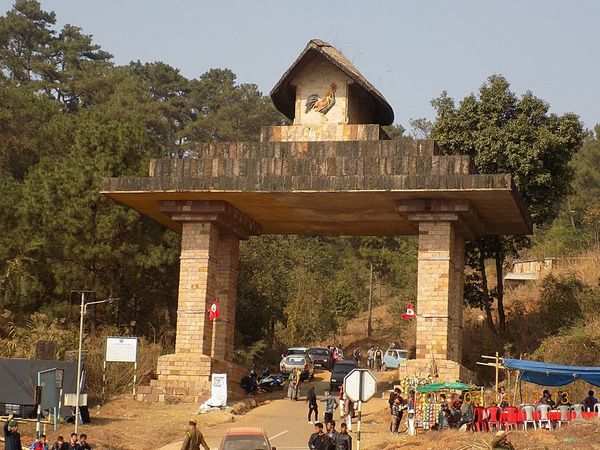 Today in the 21st century cannot anyone of us imagine of a place where there is a connection between heaven and our home Earth. Puzzled??? Then the answer is; yes, in our incredible North Eastern region of India we have an enchanting place a peak which is called the navel of the heaven which is believed by the local indigenous Khasi people to have a connection between Earth and Heaven. Well, it merely hard to say whether this is a truth or myth. But the view from the summit of this peak is breathtaking and mesmerizing and anyone can feel like they have reached heaven for sure. It’s a fact and quite strange to know that this peak is standing at 1424m altitude above sea level but it isn’t cold there atop the hill. The temperature atop is something that would suit anyone, it’s cool out there.

This peak which is called U Lum Sohpetbneng locally, meaning- navel of Heaven (in Khasi language), is a very important place to one of the three major matrilineal communities of Meghalaya; the Khasis where the people of indigenous religion go for pilgrimage which starts from the highway until 7 km uphill to the top of the hill. This enchanting place is located on the summit of a hill; in addition it also holds a legend with it; that in this place there was once a golden ladder or stairway connecting Earth and Heaven, Human race and God. However, this connection between heaven and earth was severed according to the divine will. This peak is a very important religious place for Khasi indigenous group. The first Sunday in the month of February signifies the divine communion between the divine god head and his creation (man). Because on this day every year the Khasis pay a visit to this place to carry out some important ceremonies, rituals conduct rites and offer prayers. Anyone who gets to the top of the hill can have a view of the countryside which is surrounded by it. This one view is enough to take your breath away and leave to speechless for some minutes when you having a view of the surroundings it give you feeling of freedom and freshen up your mind and do away with your tensions , you can see as if the clouds are coming  down and touching the village, city outskirts and the lake (Umiam) one cannot spot the borderline between sky and the place beneath while having a view from this peak (Lum). It is a vast site to be viewed and cherished.

Local people also claim that this peak is of mythological importance. According to local Khasi legends the supreme God head(U Blei Trai kynrad:khasi language) had arranged mankind in 16 heavenly families out of these 16 families 7 (Hynniewtrep) stayed here on the earth and 9 (Khyndaitrep) stayed in heaven. Further it is said that there was once a vine bridge on the top of this peak Lum Sohpetbneng located in the Ri Bhoi district of Meghalaya which was a medium for mortals (man) to communicate with abode of God in the sky. These 7 earthly families could freely go and visit heaven whenever they feel like with the help of this bridge. But something unfortune happened, before the bridge snapped. These 7 early families were tricked to cutting a divine tree which grew in Lum Diengiei which is nearby Lum Sohpetbneng. The supreme lord became very angry with this action of human race so he ceased the connection of heaven and earth and mankind’s access to the heaven forever. So the 9 families remained in the heaven becoming nine planets and 7 families remained here in the earth which is signified by the seven oceans.

This bridge was ceased by God because sins befell mankind, in every point of life there is jealousy, ego, anger, greed, hatred and so on. This legend makes us realize that mistake that we human race have been doing and harming nature in every way.

These 7 earthly families signifies 7 different Khasi clans that is the reason why a khasi  cannot  marry another Khasi belonging to same clan as they belong to same family or hut (trep)and its believed that people predominating the different districts of the North Eastern state of Meghalaya such as East Khasi Hills,  West Khasi Hills, Jaintia Hills and the Ri bhoi districts.All these mentioned districts lies in the  East side of the state Meghalaya.It is believed that Lum sohpetbneng and people predominating the eastern part of Meghalaya have descended to this very land (Earth) through this bridge only. This is the reason why khasis consider this peak as a sacred peak.

U Lum sohpetbneng lies 21 km north of the state Meghalaya’s capity city Shillong. It is 38.5 km away from the headquarters of Ri Bhoi district of Meghalaya which is Nongpoh. This peak lies between two valleys, Rangmen and Suner, overlooking the picturesque and mesmerizing Umiam Lake (Barapani) in Ri Bhoi districtof Meghalaya. U Lum Diengiei stood head held high across the lake.  It’s a crater-like drepression and reminds us of the scariest mythological disaster that cut our ties with the heaven.It is covered in an aura of sanctity, purity and sacredness, being the repository of ancient Khasi indigenous values, wisdom and knowledge, this peak consists of deep-rooted religious philosophy of the indigenous group. With all these features it becomes Meghalaya one of the most worth visiting tourist destination. If you have any tripping plans for Shillong you must plan a visit to this place too atleast once.

How to reach Lum Sohpetbneng???

*From morning 9 am to evening 7 pm everyday you will get a maxi share sumo from Garikhana sumo stand which is especially Shillong-Nongpoh cab.  En route you can get down at Umsaw where this beautiful place is located.

*You can also book a cab with us a Travenjo.com. We are the best tour and cabs portal based in Shillong. We specialize in Assam and Meghalaya. Log in to our website for booking a cab and enjoying hassle free rides, cheaper rates, tour with experienced drivers.

Timings to visit U Lum Sohpetbneng: