Acclaimed as Asia one of the finest museum, the Don Bosco Museum which is located in Shillong (known as Don Bosco Center of Indigenous Cultures) isn’t just a museum. It is a mirror to lifestyle, occupation, attire, etc of the indigenous  tribal’s society of the North East India.it is located in Mawlai Phudmawri area of the city Shillong.The Don Bosco Museum is a seven-storey hexagonal shaped building and it also provides the skyline view which allows the visitors to glaze the overview of Shillong. The design of the building is marvelous and it’s referred to as Shillong’s architectural pride. 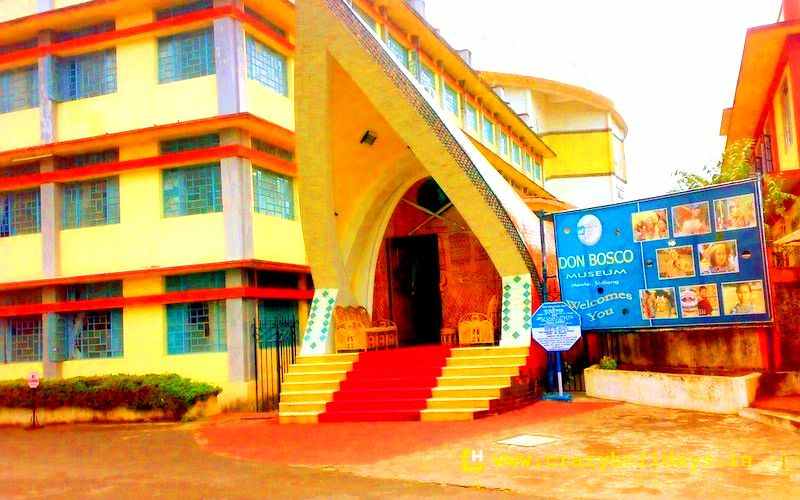 The idea of a DBCIC and especially of the Museum has to be seen in the context of the reopening of the Sacred Heart Theological College (SHTC) in 1976 after a long period of wanderings..The construction of the Don Bosco Museum was completed by the end of October 2000.It might be noted that more than lakh of visitors have already visited the Don Bosco Museum. Princess of Thailand is one of them .The museum is spread across a large area of land that is why it takes nearly more than a half day to view all its assets.

The museum gives an anthropological insight of indigenous society of all the states of North East India. To describe the museum further it has 17 galleries displaying artifacts, paintings and fiberglass items. Some of the galleries namely are; Musical instrument gallery, Mission and culture gallery, the land and people’s gallery ,our neighbor’s gallery ,alcoves museum, language museum ,housing gallery ,fishing and hunting gallery, agriculture gallery, basketry gallery, ornaments and costume gallery, prehistory gallery, art gallery, culture and religion gallery ,food gallery, etc. This entire gallery provides close information about the life of tribal’s in North East India. A new comer can easily relate with the lifestyle and tradition of the indigenous society of the North East India just by view and examining the galleries.

BRIEFING OF THE GALLERIES

North East India takes music very seriously and this music gallery can clearly show this. Music is a part of every social function and is also used as a tool of knowledge transmission. It’s interesting to note how the lifestyles and occupation of the North Eastern region of India, the natural environment, agricultural cycles, history and conflicts happening in North East India have shaped songs and tunes. This gallery is quite magnificent with decorated frame displaying musical instruments (do not miss the famous Manipuri Pung), drawings, recordings and LCD displays showing clippings of indigenous musical instruments. This happens to be one of the finest illustrated sections in the museum.

This gallery introduces you to the encounter between a whole array of different cultures in India’s North East region and the Church. It may be noted that there are four sections.

The section 1 features the admiration of the Church for the region’s cultural diversity represented by a crown of dances and ornamental figures on the top rim of this gallery.

Coming to section 3 we are highlighted with the history of the above-mentioned services from the First to the Twentieth century. In the light of that history we have the Meghalaya Gallery. And that takes us to Section 4.

Further in section 4 we step into the Meghalaya Gallery, we have the mythology of the indigenous Khasi society of Meghalaya to the right and to the left we have our Garo indigenous society’s mythology. Both of these cultures could be understood better in the light of their own mythology.

The land and people’s gallery

This gallery showcases the many tribal faces, and the uncountable differences and also the minimum numbers similarities among them which make North East India a unique part/region of the country. This section might be specifically exciting for students of anthropology, social sciences and history.

This gallery is a very interesting one as it displays photographs and models of neighboring countries of North East India like Bhutan, China, Nepal, Myanmar and Bangladesh. A touch screen facility is available for the visitors to freely expand their knowledge with the help of basic data of each country and its culture.

The alcoves gallery store information about various aspects of the North East in great detail. It is the most textually informative section in the museum. The alcoves here are Garo huts, traditional weaving, Aptami in paddy fields, sacred forest of Mawphalang, Bamboo transportation and Mizo Village, Loktak Lake, Traditional Manipuri dance, Garo top huts. Students, scholars and researchers researching on any of these aspects will find this alcoves gallery really very helpful.

It may be noted that North East India as a whole is home to more than two hundred languages or may be more, and many more dialects. Although most of the languages in the region belong to the Tibeto-Burman sub-family of the Sino-Tibetan family, the languages are highly heterogeneous and are often mutually unintelligible. The Language Gallery displays different charts showing the languages of the world – Asia, India and those of North East India.

When we go round this gallery we find a plaque of the North East with different styles of traditional houses displayed on it. These give us an idea of how tribes across the region traditionally constructed their houses. It is very interesting to note the fact that the tribes of North Eastern India use as many as natural substances for making traditional houses .Houses here are made up of materials sourced from nature like leaves of trees, sticks, bamboo, wooden planks, grass, mud and hay.

Different communities of North East use different kinds of techniques for fishing and hunting and they are displayed with the descriptions and name of the weapons in this gallery.

This gallery displays the three main techniques of agriculture in the region; plough cultivation, shifting cultivation and wet-rice cultivation. You will find variant farming and agricultural practices of the northeastern region of India that are displayed in the Don Bosco Museum.

In Nagaland (a North Eastern State) there is a saying that “Man starts life in a cradle of bamboo and ends it in a coffin of bamboo”. These words show the importance of bamboo in the north eastern indigenous cultures. Basketry is a fundamental skill for all tribal societies of North East India, each tribe engages in it, and baskets are fashioned in many shapes and forms, and are used for different purposes. If you have a close look you will be able to identify and understand the different styles of basket weaving and making. This gallery showcases the weaving and bamboo crafting styles of different tribal groups. 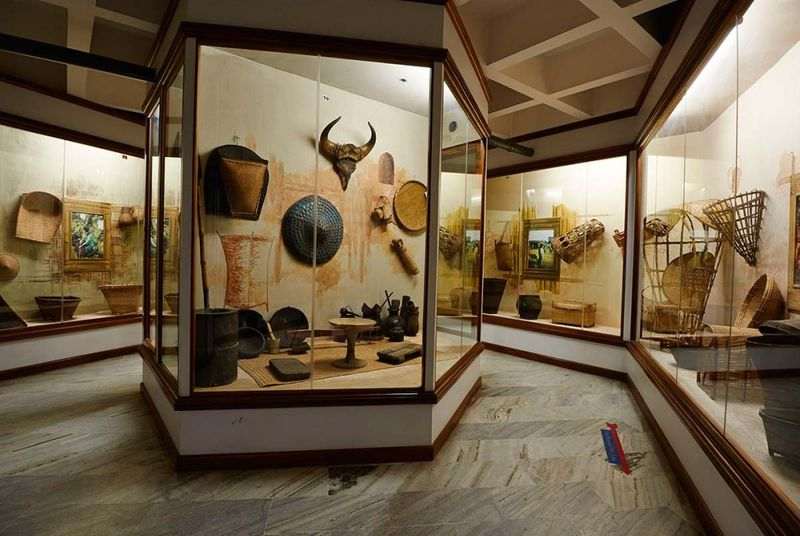 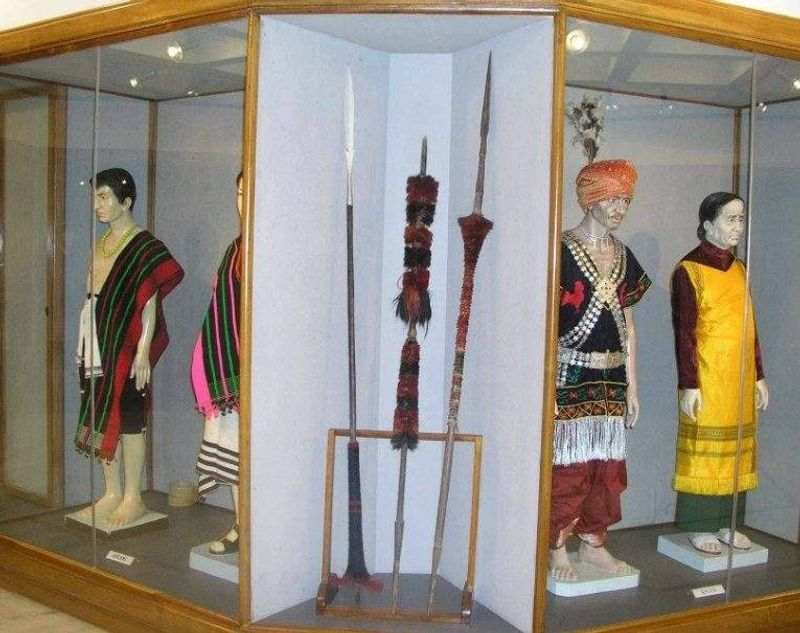 When we have a look at this gallery we can find that it contains lots of information about the history and evolution of mankind along with the cultural and social evolution of man. This process is depicted through sketches, models, paintings, miniatures and some exhibits. To attract visitors this gallery is specially showcased with all the NE tribe races, their anthropological connections and characteristics. The skull exhibits are also fascinating.

This gallery is a window to the people’s creativity. It displays a wide range of collection of rare paintings and artifacts from the different States of the North East.

This section celebrates the unity of people of diverse backgrounds through religion and culture, though the name may trigger you to skip this section, do spare a few minutes to take a look here. One must have a look have a look at the miniature tower in front of us. It is as tower, and  is used for ceremonial purposes during the celebration of Behdeinklam festival which is the most important festival of the Jaintias of Meghalaya.

Food gallery displays photographs and models of different kinds of traditional dishes cook by the indigenous groups as well as the food habits typically in each of the state of North East India. Different indigenous fruits, vegetables and slices of these regions are also on display.

Moving ahead to the entrance and indoors of the museum

The entry of the museum is constructed in the shape of Naga house. On entering the museum the visitors can find statues of different tribal societies of North East India in their traditional attire welcoming them. These statues seem to be very lively. The museum as well as the area in and around the museum is very clean and well maintained. The Don Bosco Museum has been provided with multimedia support which sums up as ‘one of its best features.

DBCIC cannot be only considered as a museum. It’s more of an institution carrying out its own publications, research wing, newsletter and a calendar full of cultural activities. Don Bosco museum also holds competition for writers, musicians and lyricists in its premises apart from cultural activities. Researchers and scholars describes the museum as their favorite place for understanding the indigenous culture of North East India.

Apart from the galleries, the museum issues publications and hosts a well-stocked library for the benefit of visitors, students and scholars. The research center, known as the North Eastern Institute for Research in Anthropology (NEIRA) plays as a hub to study different themes relating to diverse facets of India’s North Eastern region. The library currently houses about 110,473 volumes dealing with study and cultural aspects of North East India. The museum also welcomes its visitors to have a breathtaking view at 360 degree of Shillong City from the Museum’s skywalk.

Along with mesmerising its visitors with its breath taking assets this museum also provides comfort to its visitors in many ways. The museum is well facilitated with lifts, touch screens, tabs, computer area for students, souvenir counter, drinking water etc.

To wrap the topic we can say that the Don Bosco museum of Shillong is fact a pride of Shillong. One must visit it at least once in a lifetime to discover and experience North East India (Paradise unexplored) under one roof.

Open from Monday to Saturday, Closed on Sundays.

Note: Students won’t get discounted rates unless they are able to show a valid ID card

How to reach Don Bosco Museum?